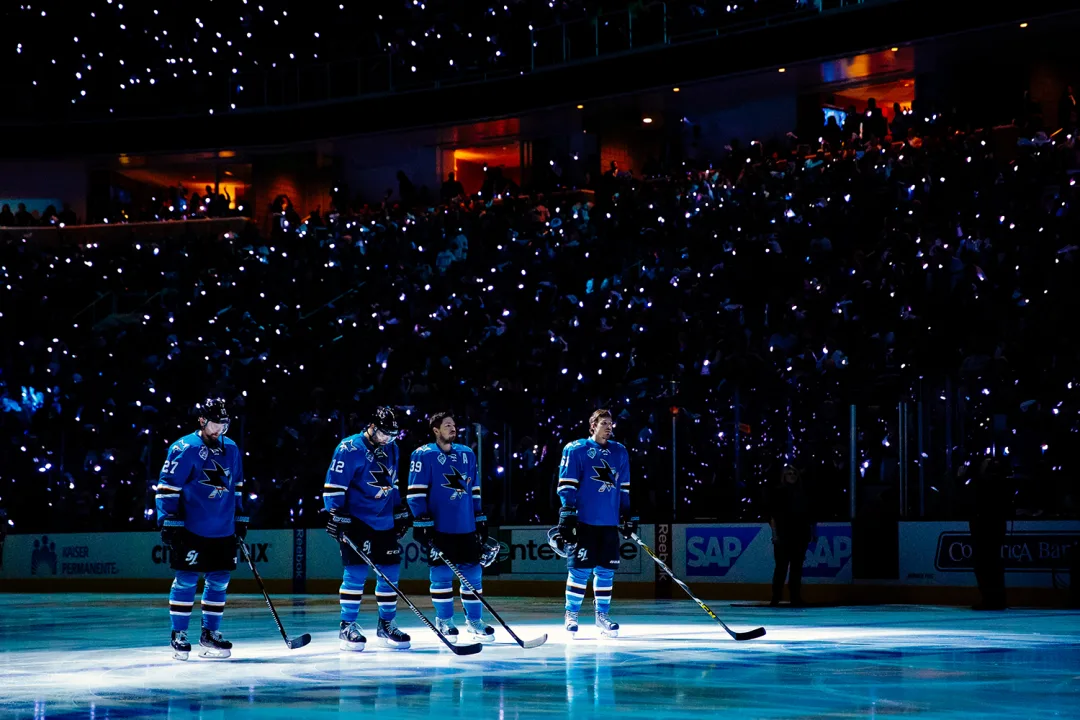 I was three years old when my dad, Denis, took me to skate at the local rink in Aneroid for the first time. He said I got halfway around the rink, turned around and headed back to him, handing him the chair he’d given me for balance. Hockey has always brought me a happiness I can’t put into words. It’s the smell of the rink, the laughs with my teammates, the competition, the thrill of victory, and yes, even the sorrow of defeat that fuels the fire to go out and try again.

Sometimes, that was on the dugout of our family’s farm. I’d come home in tears with frozen feet, and my mom would slowly warm me back up. Those core memories, all centered on hockey and family, make up so much of who I am. They are still the most important things in my life today.

Growing up on our family’s 1,600-acre farm meant a lot of hard work, sacrifice and an appreciation for the simple things in life. The sacrifices that everyone in my family made for me allowed me to follow my dreams. My career doesn’t happen without each of them. When I was just 14, my parents allowed me to move to Swift Current with my grandma.

The hockey was better there, so after Mom had told me to stay out of trouble or I would be coming back home, I packed my bags, my favorite VHS Lemieux tape and left. As thankful as I was then, being a parent now, I am even more thankful. I am a lucky man for a whole lot of reasons, and my friendships from hockey is definitely one of them. Maybe this hockey thing could be my job.

As the ’97 draft was coming up, my parents had started to get calls from agents wanting to represent me. «Don Baizley made it clear that playing hockey comes first, not the business of it. » Sadly, Don passed away in 2013, but I will forever owe so much of my career to him. I can’t overstate the influence he had on my life, or the lives of his other clients.

I knew if they didn’t trade their pick, I would be heading to California, but they could have traded it away at the last second if they’d wanted. All those hours at the rink, in the gym, schoolwork on the bus rides, bumps and bruises all leading to that moment. I couldn’t have told you much about San Jose before the summer of ’97. I knew it was in California, but that’s a big state.

Kelly Hrudey, who was playing there at the time, had gone into Dean’s office and said he and his wife, Donna, had a guest house that they wanted me to stay in. My parents were thankful, the team was more than okay with it, and I was excited to not have to go home to an empty apartment each day. I learned so much from so many of those guys I played with my first years in the league. The reality is that we learn from everyone we come across in life.

Playing in San Jose was the stuff of fairy tales. It was a new team, a beautiful city in California . Building those first years of history for the Sharks was a responsibility I didn’t take lightly, or for granted. I hope the city, the organization and the fans can be proud of what we accomplished then.

There are so many moments throughout my career that I can look back on and say were among the top. Bryan later introduced me to my wife, so all is forgiven. After we won gold, my wife and I were in a cab trying to go to dinner with Brenden Morrow and his wife. That little boy on his dugout with frozen feet would never have believed the life he would get to live.

To see how far the team and city had come in the 19 years since I had been drafted made me proud for all of us. I moved my family to the center of the hockey universe and put on a Maple Leafs sweater. A real «pinch me» moment. My family loved it there, and our boys still want to go back and play on our backyard rink.

I have no doubt that those guys will win a Cup one day, and when they do, I know they’ll remember all those mini-stick battles in the basement. That jersey still hangs in my closet and I can’t help but wonder why God has been so generous to me and allowed me to live this life. As with most professional athletes, I feel like I could play forever. I know I can’t make up for lost time with them, but I can be present and enjoy the last days of them at home before they each go chase down their own dreams.

Today, I announce my retirement from hockey. I am beyond lucky to have had the career I had, but I did not get here by myself. Whether it was doing my chores or driving hours to watch my games in the middle of winter. I can’t tell you how much I have appreciated having you both in my life.

I came to San Jose as a 17-year-old boy. I hope I have left a history that you and the city can be proud of. Those guys are like family to me. To each of my teammates during my career, thank you for being a part of my dream come true.

I did, and I am forever grateful and humbled.