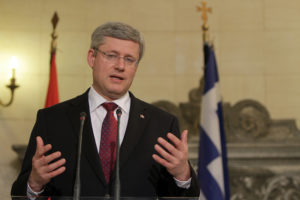 Add Stephen Harper to the list of former heads of state that have weighed in on Donald Trump’s presidency.

Speaking at the Observer Research Foundation in New Delhi, India, Harper was optimistic about Trump’s impact on America’s foreign policy.

“I had a front-row seat for 10 years, up close, watching the United States foreign policy swing back and forth from overreaching global adventures and then to withering self-criticism and retreat. Trump’s approach could avoid both the tendency of the U.S. in one era to overestimate its capabilities and in another era to overstate its limitations.”

Harper believes Trump could be a stabilizing force in U.S. foreign policy. This is an interesting assertion, considering his lack of experience with foreign policy was one of the biggest points of emphasis by Hillary Clinton during the campaign.

In his speech, Harper further discussed free trade and the growth of populism in what are becoming more uncertain times.

Read the full story on the CBC.