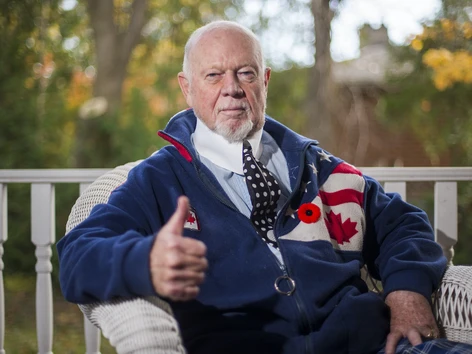 Don Cherry, he who reigned so long as the Emperor of Coaches Corner, now for some time in what I will term a kind of forced retirement. I do not think it can be challenged that for as long as he so briskly issued his wisdom on the national game from that singular podium there was no other individual Canadian broadcaster who commanded so large and loyal an audience. From the smallest, most remote village to the most crowded cities, old and young, everyone knew Don Cherry. He favoured rather high-visibility outerwear and favoured colours derived from tropical festivals and the more extroverted birds of the Amazon rainforest.

Cherry. It has been a curiosity of mine for a long time why this most vivid of Canada’s patriots, a gentleman so greatly favoured by our military, and hailed by such a broad sweep of Canadians, was never enrolled in our country’s honour system, the Order of Canada, as one of its outstanding citizens and achievers. Was he perhaps too «common?» I would not like to think so, for that would imply a certain snobbishness attends the choice of who may be considered for the country’s great honours.

No farewell dinner from Hockey Night in Canada, no memorial news reels of his more exuberant moments. CBC, in particular was shameless in its silence, in fact callous in refusing him the kind of celebratory farewell they have given to so many with far less connection to the wide audience of Canadians. It does not take much imagination to guess how large an audience would have tuned it to a Farewell For Don night. But then, perhaps high audience numbers are an allergy risk at CBC.

However, what most irritates is that the well-placed who determine which Canadians are placed on the honour roll of Canadian achievement, the Order of Canada, have for so long kept him off that high scroll.