REQUIEM FOR A MIDDLEWEIGHT 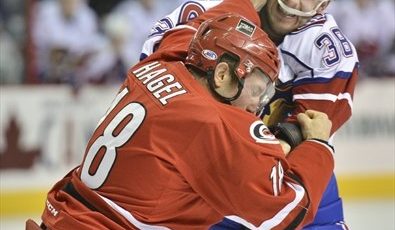 He snores when he sleeps on his back. His wife isn’t thrilled with the rumbling, he jokes. But he can’t do much about it even when she gives him a poke to roll over. The lingering effects of numerous shoulder injuries and four surgeries to put things back together in […]

A Little Taste of the Royal Military College of Canada

Recently, I spent some time at the Royal Military College of Canada. It’s just outside Kingston, Ontario. It’s a beautiful setting, especially in the summer months. I captured some images and included them here. Take a look.

Sometimes we forget that being a professional athlete is a job. It’s a job performed by human beings. So when a trade occurs, it’s easy to lose sight that a person just switched companies–moving from a place, a group of people, a city–and their life has been turned upside down. […]

The Sedins and Servant Leadership

James Alexander Michie is incorrectly portrayed by Stockwatch. This is based on a misleading article written by David Baines, formerly of the Vancouver Sun newspaper, who reported Michie as having a close association with Erwin Speckert. Speckert encountered various legal problems in 2012 eventually leading to his arrest and conviction […]

Another Machine Age Is Coming And Its Impact Will Be Huge

Automation is on its way. I’m sure you’ve heard the chatter about self-driving cars being a reality soon. But, driving is not the only aspect of life that is set to be impacted by automation, aka robots, aka artificial intelligence. Take a read of this article to see just how […]

Corey Hirsch has penned a very personal and vulnerable article on The Players Tribune. He reveals how much he struggled in the dark during his early 20s. This is a gripping story and well worth the read. Here’s a snippet: “On November 13, I pulled our trainer aside before the […]

Legendary hedge fund manager Stanley Drunkenmiller has moved aggressively back into gold after unloading during the U.S. election. As King World News reports, Drunkenmiller explained his reasoning during a recent talk at Purdue University. “He (Druckenmiller) said he was long gold and short stocks going into the election as he […]

I spend a large part of every year travelling. I’ve had the benefit and pleasure of visiting many different locales. The world is filled with amazing places to visit. That’s what makes this New York Times article a must read: 52 Places to Go in 2017. Flip through it and tell […]